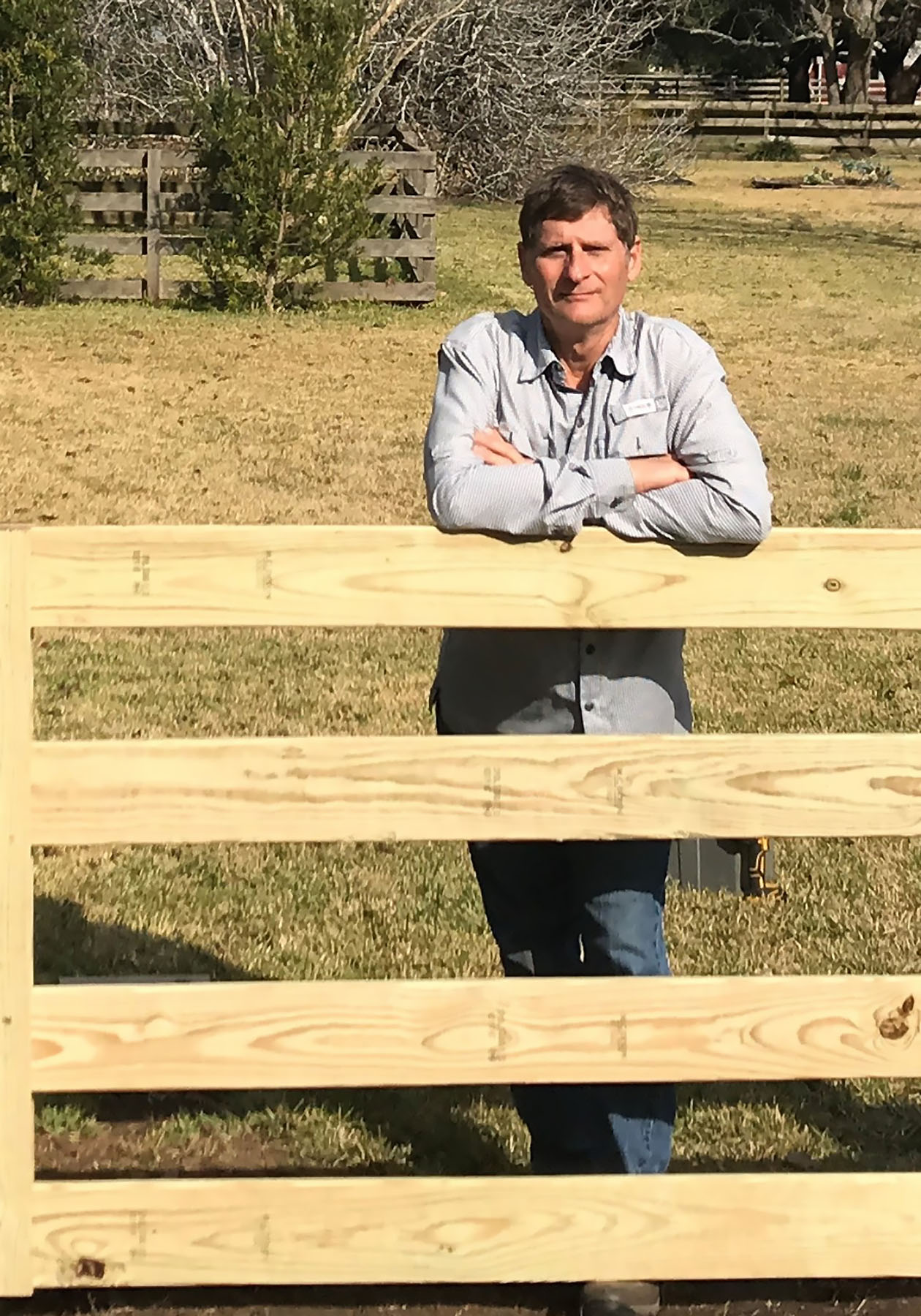 I was born on New Year’s Day in Fredericksburg in 1962.  My family operated a farm/ranch about half-way between Comfort and Boerne along Big Joshua Creek.  In 2011, our family’s operation became a Century Farm.   I joined 4H when I was 6 years old and my project from the start to end of high school was raising broilers. Broilers always turned a profit.   As I recall, Kendall County did not have a soil judging contest but the SWCD held a plant ID contest each year. I won the contest in the junior division in 1971. (I followed our best high schooler and it seemed his answers were pretty accurate.)  I chose Texas A&M because that is where you went for an ag-related degree and a good chunk of my uncles and cousins had gone there.  Somewhere around ’74, we took a trip to A&M to visit a cousin and he got us tickets to the A&M vs. TCU game.  The Aggie Band was amazing so I decided when I went there, I would be in the Band. Upon graduating in ’84, I was commissioned a 2nd Lieutenant and that Fall I started at Ft Huachuca, AZ.  It was a nice quiet Army post. In ’85, I was transferred to Ft Bliss, El Paso, TX.  The Army told me I could see the world, but they couldn’t get me out of my home state. I was in Military Intelligence, and the most interesting assignment I had was a 6-month detail to Honduras. This was during the time of the Nicaraguan Sandinistas vs. Contras.  The biggest benefit I received from that duty was having to give a briefing every day.  That routine knocked out any fear of going up in front of an audience.  Since I held a Reserve Officer commission, I was able to transition from active duty to the reserves in 1987. I stayed in the Army Reserve until I retired with 20 years of service in 2005.

In the fall of 1987, my uncle, Clarence Wiedenfeld, told me that the SCS was going to hire a bunch of soil scientists and suggested I fill out the paperwork to get on the list.  There were several positions open for a soil scientist. I chose the initial soil survey of Karnes County.  The other choices included East Texas or the Panhandle.  I reported to work at the end of January 1988.  I was supposed to work for 6 months or so with the DC but there was such a push for getting soils maps done for Food Security Act programs, that I never did the orientation with the conservationists.  To this day, I don’t know how to do a conservation plan.  My first field day was a cold, windy overcast day in February. Ramiro Molina, GS 9 Soil Scientist, took me out for training.  On one of the first uses of the push probe, the probe extension came apart from its connection with the probe. This left a one-inch diameter probe stuck some 2 or 3 feet below the soil surface. Mr Molina reached into the toolbox and grabbed two sharpshooters and told me start digging because the Area/State Office wasn’t going to get us new probes any time soon. That was my first hole.

We finished the soil survey of Karnes County in 1991. At that time, Ramiro had become the Area Soil Scientist for the Alice Area, and there was no place for me to go right away; so I sat in the office and worked on maps. A few weeks into this routine, I was summoned to the Area Office in Victoria.  Wes Miller, Area Soil Scientist, told me that I was to do a 2-week detail in Goliad County on the Gulf Coast Prairies MLRA to map about 20,000 acres. That was my first taste of MLRA 150A.  When I completed that detail, I was transferred to Gonzales and was on the initial soil survey for that county for almost 3 years.

I worked on the Gonzales County initial soil survey until 1994.  Gonzales County was difficult to grasp. It has something like 16 geologic formations, two soil temperature regimes and was almost in the udic moisture regime.  My most memorable experience came one day in the Fall of 1991. Ed Griffin, party leader, wanted to have all the SWCD board members places mapped as one of the first things we did. The owner told me it was ok to be on the place and that he wasn’t going to be there for several days. One afternoon, I noticed smoke coming up on a portion of the ranch that I had just worked. The grass was dry, and I jumped the conclusion that I had started a fire with a hot exhaust system. I drove toward the smoke and found a sizable fire. Since I was at the county road, I drove to the local service station to report the fire and I went back to the ranch. A few minutes after getting back, the owner showed up and I told him about the fire.  He asked me to help him get a plow on his tractor and together we went up to the fire area. By that time, volunteer fire department had arrived. In about 3 hours the fire was subdued, and I went back to the house with the owner. I told him I may have been the one that started the fire and that I was very sorry for the loss of his pasture. He told me the firemen had already found a cigarette butt by the county road at the start of the burn area. At that point, he asked me if I knew why he was absent the past two mornings.  I said I did not, and he told me that he and his wife had gone to Victoria to be interviewed by the newspaper.  The man was a Pearl Harbor veteran and was being interviewed about his experience on that day.  He told me the whole account of the day from his point of view and ended the story by waving his arm in the air and saying that everything on his ranch could’ve burned up, but that he had seen a lot worse on Dec 7, 1941.

From Gonzales, I went to Hardin County, deep in the flatwoods of southeast Texas.  Every soil scientist from drier parts of the state should spend some time in an area that gets 60+ inches of rain per year.  The first year I was there, we had over 80 inches with a few local rain gauges totaling over 100.  You discover soon that you can’t let a few raindrops chase you away from the field if you want to get anything done. In addition, the primary crop grown is the loblolly pine.  In my opinion, the pine tree doesn’t care too much about our drainage classes.  If you want to see spodosols or soils with pH less than 4, head to the flatwoods.

My last stop was Rosenberg. I started as the MLRA 150 soil survey leader in 1996.  It was supposed to be an office focused on updating soil surveys in MLRAs 150, 151, and 152B, but the first 12 years were spent on various initial soil surveys.  It always seemed that every time we started to update an area, we got pulled away to do something else of higher importance.  Nonetheless, we were able to completely update the Texas portion of MLRA 152B and the Katy Prairie west of Houston.  In addition, we assisted in several studies. Lastly, we started in 2019 a Coastal Zone Soil Survey of West Galveston Bay.  Trying to collect, describe and map subaqueous soils is a challenge.  If you want to see a transformation of soils from completely reduced to oxidized, take a core out of the bay, and open it up.  At first, all you see are neutral colors. Within a few minutes the transformation starts to occur, and you will see the colors change from neutral, to greens or blues. The oxidation process continues, and the soils become yellower to brown.  In about a week or so, the profile looks almost like a subaerial one.  At the time of opening the core, you see no redox features but after a week, you see manganese masses and iron oxides.

The Professional Soil Scientists Association of Texas is a 501(c)(6) organization which promotes the profession of Soil Science.